Sorry, you need to enable JavaScript to visit this website.
Skip to main content Skip to search
You are here 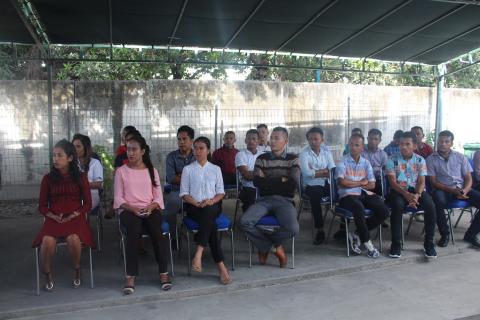 Twelve Helpdesk staff from TIC TIMOR I.P. (Information and Communication Technology Agency) have been dispatched to 12 Municipalities to support services provided by the agency at the Municipalities.

During the send-off ceremony, the Executive Director of TIC TIMOR I.P. Roberto Caitano de Sousa Vicente, reminded the Helpdesk staff that they represent the image of TIC Timor in their respective workplaces, therefore, they should work as a team and remain humble.

The Chief Executive also said that these officials will not stay permanently in one municipality but will be rotated across all the municipalities to create a sense of national unity.

Roberto also affirmed, that he had no doubt about these officials’ capabilities because they had been selected through multiple tests that not only assessed their intellectual abilities but also their personalities.

The Director of Human Resources from the Ministry of State Administration, Maria Dulce, who was present at the ceremony said that technology can support public administration to be more efficient and transparent because the municipalities are lacking human resources the presence of these officials will strengthen the capacity and quality of the municipal services.

These Helpdesk staffs are composed of seven (7) male and five (5) female officials, who have been designated to work at the Municipalities of Aileu, Ainaro, Baucau, Bobonaro, Cova-Lima, Dili, Ermera, Liquica, Manatuto, Manufahi, Lautem, and Viqueque. # Média TIC#